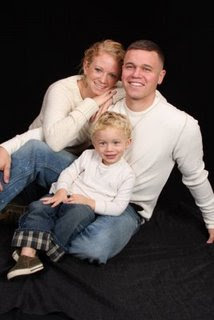 It looks like some weight gain is in my near future...let's hope not 43 lbs this time. My husband, Chad, and I have been hoping and praying for 5 or 6 months for another addition to our incredible family. With Griffin, we hit the jack pot after just two months. Not so easy the second go round. We started to really worry after about the 4th month. I understand that the average woman takes anywhere from 6-12 months to get pregnant. However, I had a knock-down drag out fight with endometriosis that ended with surgery about 9 months ago. We feared that the disease had done the ultimate damage (as the doc warned was a possibility).
However, my parents had a different theory. They were concerned I was over doing it in the gym...is that even possible? Well, I was teaching seven fitness classes a week and training for a half-marathon. I guess I can see their concern. However, my body fat hadn't dropped too dangerously low. Not to mention, there are plenty of elite athletes (much more extreme than me) who have (semi) regular periods and get pregnant while training. To top it off, I had already paid my registration fee for that half marathon and trained my butt off so I was bound and determined to cross that finish line.
Needless to say I didn't listen to my parents. I continued to train and four of my awesome high school friends flew out to Washington to run that race with me. By the time race day rolled around I was seven days late. Not too crazy for me. I was 10 days late the month before. After 3 negative tests and about 30 bucks (those suckers are expensive), I started my period. However, I let my friends convince me that this might just be the month. 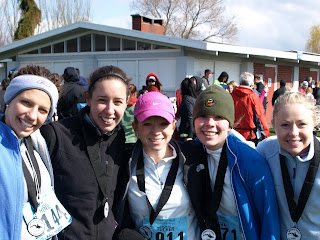 My incredibly small bladder woke me up at 4am. Since the test is most accurate with the first bathroom break of the day, I tip-toed down stairs to take the test as I didn't want Chad to know so I could surprise him if the test was positive. I stared at that stick expecting a negative reading. To my surprise, a faint second line appeared...then it got darker...oh my gosh, WE ARE PREGNANT. I set my surprise Chad plan into action and tossed and turned in bed until I heard some of the girls fumbling around the kitchen. I couldn't hold it in. I had to tell someone. I rushed down to stairs to share the news and we quietly jumped around in excitement. 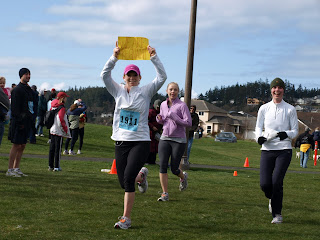 We set out for the race and still, Chad had no idea. The half marathon was incredible. I loved every second. I never felt like I couldn't go another mile and I never thought, who does this to themselves. The last mile was the easiest. I couldn't get to the finish line fast enough. As I rounded the corner I could see Chad kneeling to take pictures of this big accomplishment. Little did he know, he was going to be a dad...again. When I was 20 feet from Chad I held up a yellow sign that I had made at 4am that morning. It read: WE ARE PREGNANT! The look on his face was priceless. He fell face first in disbelief and even shed a few tears. His buddies, and even perfect strangers, jumped on him in celebration and I crossed the finish line with a big smile on my face!
We are so incredibly excited and Griffin claims to want a little sister. No morning sickness yet, but I am only 7 weeks along. I plan to continue teaching my classes and I still run 3-5 miles twice a week. Don't worry, Mom and Dad, since I was exercising like this prior to getting pregnant it is still safe! I will keep you posted on my journey.
Posted by Sommer Tucker at 9:16 PM