Yesterday I went to the doctors for my 10 week ultra sound. We were so excited to see his or her heart beat for the first time and see the body start to take shape. However, before we got to the good stuff we had to get past my demon first...yes, the oh so dreaded scale.

With my last pregnancy, the scale really was my enemy. They tell you to keep your weight gain right around 25. I ran until I was seven months along and exercised until the little guy popped out and to see the scale shoot all the way up to 43 was discouraging. Yes, I lost 20 pounds within a couple weeks of delivery, but the remaining 23 was ridiculous. So, I promised myself that I wouldn't let that happen with the next baby.

So, here I am, facing my first obstacle. I am at the end of the first trimester and I know that not one pound of weight gain is necessary during those first 12 weeks. However, I have given in to a few not so healthy cravings. Still, I have continued to workout with my classes just as I did before I was pregnant. With my husband standing behind me (just as nervous as me because he knows he wouldn't hear the end of it if I gain a pound), I step up and wait for that number to pop up (picture Biggest Loser weigh in). After what felt like an eternity, my pre-pregnancy number popped up... WAHOO!!! Chad and I both did a small victory hop in excitement. The nurse thought we were crazy but not gaining a single pound was a small Tucker victory.

I couldn't help but share my excitement with the doc. We laughed and he continued to tell me that he didn't care how much weight I gained as long as I gained at least 15 pounds. I assured him that 15 pounds wouldn't be a problem. He explained that 15 is really all I need for a healthy baby and "the rest is on me." No, my new goal isn't to only gain 15 pounds. However, I do want to stay as close to 25 as I can. 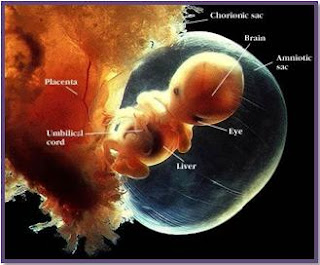 After all the talk about weight we finally got to the good stuff...the ultra sound. With the issues that I've had with endometrios, a small part of me feared that something would be wrong. I was relieved when the little body popped up and I could see his or her heart beating a mile a minute. It was amazing to us. I think we are able to appreciate it a little bit more this go round since we know the joy that a child brings to one's life.

The baby measured a teeny tiny 2.4cm and around .07 ounce, about the size of a strawberry. The baby has little hands, feet, fingers and toes. He or she is a wiggling and dancing around in there. Although I can't feel it yet, we could see it on the ultra sound. The heart rate came in at a strong 177 BPM. Old wives tales would predict a GIRL. But, as long as she or he is healthy I will be a happy momma.

The baby still gives me a run for my money both day and night. Meat by no means sounds good to me but pasta and popsicles usually hit the spot. Baked Lays are my go to when it comes to my nausea and they usually do the trick...for a little while anyway. My energy is still no where to be found but my first trimester is coming to a close so I look forward to my come back. I'm still hitting the gym hard. That usually gives me an energy boost for a couple of hours. However, my two-a-days usually leave me exhausted. I will keep you posted as I sail into the next trimester. I have high hopes for weeks 13-27...the so called "honeymoon period."
Posted by Sommer Tucker at 11:30 AM