Don't Blame It on the Lunges! 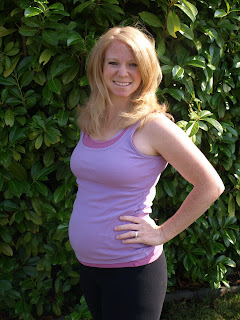 My husband and I had a small scare the other night. It was about 8 o'clock in the evening and I sent my husband up to the grocery to satisfy my craving for ice cream. In the mean time I decided to jump in the shower as I had just finished teaching a killer Spinning class. This was actually my second class of the day as I was asked to sub for another instructor. I know, I was told to kick the two-a-days to the curb, but she was in a bind and I have trouble telling people no.
Anyway, as I was bent over blow drying my hair with a diffuser I noticed a small amount of blood on the inside of my thighs. In disbelief, I waddled over to go to the bathroom...sure enough, more blood. I started to panic a little. As I ran (more like a quick waddle) down stairs to find the number for labor and delivery, I started to second guess my idea of exercise during pregnancy. Was I pushing myself too hard? No, I've been listening to my body and avoiding the mistake of exercising to exhaustion. All my education told me it was good for me and Riley. Still, I couldn't help but wondering if teaching two that day and pushed me over the edge. The pressure in my pelvic area had been increasingly painful, the infamous waddle had recently made its debut, I felt nauseated in my Mom's Boot Camp class earlier that day and I felt like Riley could literally stick her hand out and wave at me she was so low.
The labor and delivery nurse advised me to come in just to be safe. Even though I wasn't gushing blood, I honestly couldn't remember the last time I felt Riley move...that really alarmed me considering she usually performs kickboxing class on my stomach most of the day. Upon arrival, they hooked me up to monitor Riley's heart rate and activity. We held our breath until we heard that beautiful heart beat...music to our ears. While Riley was doing just fine, they told me that my uterus was irritable. I had never heard of that term before. Basically, I was having small contractions...WHAT?!?! I'm only 25 weeks into this! Riley is nowhere near done cooking!
Still, they didn't seem to panic. They kept me for a little while and sure enough, my uterus took a chill pill. Her heart rate was perfect and the contractions faded...phew! Of course, I wanted to know what the heck caused this...were my lunges to blame? I thought for sure they were going to tell me that exercise was the enemy. To my surprise, they emphasized the fact that my exercise was in no form or fashion the antagonist. They explained that she has just set up camp incredibly low in my pelvic area. This causes a great deal of pressure and ruptured blood vessels causing the bleeding. After examination, they determined that my cervix is still long and closed. Riley is at no risk of making an early appearance.
They asked me to take it easy for a week and then cleared me to hit the weights just like I was before. I have a renewed confidence in my dedication to exercising during my pregnancy. Oh, did I mention I have only gained 15 lbs. I'm right on track to gaining a healthy 25-35 lbs. With that in mind, Chad and I hit McDonald's on the way home for chicken nuggets and french fries...hehe. Then we rounded out the night with that ice cream I sent him to the store for hours earlier. Did I feel guilty? Not at all! It's okay to give into those crazy pregnancy craving once in a while. Just don't make it a habit.
Side note...Chad is also down five or so pounds. Last time he gained a little weight right along with me. Guess my healthy obsession with exercise and nutrition is rubbing off! 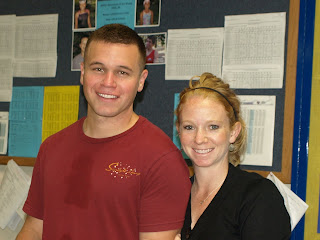 Posted by Sommer Tucker at 8:00 PM