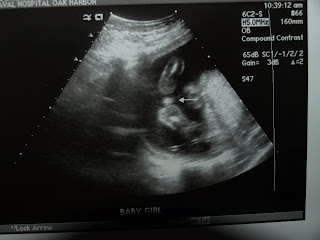 GIRL...Riley Ann Tucker!
I know this post is a little late, but on July 17 we had the "big" ultra sound. As soon as the image popped up I was convinced it was a boy. The technician came up from under the butt and I was sure I saw "something". I forgot how amazing it is to watch as the technician explores the heart, little legs and face(totally has Chad's lips). I swear she even gave us a thumbs up one time. However, when it came time for the tech to explore down there, we opted to close our eyes and have him put the result in an envelope...it was torture (we kind of stole that fun idea from our friends, Lindsey and Nick). 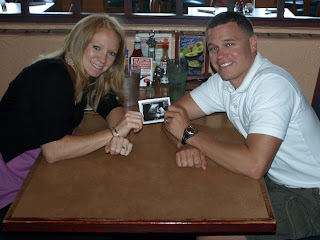 Griffin was at a friends house playing so we decided to indulge in some Mexican and open our envelope. We had originally wanted to go out for a nice dinner but my stay in the hospital the day before left me a little low on energy (picture uncontrollable vomiting, extreme abdominal pain, dizziness, and dehydration...not a good scenario for Riley). Anyways, we could barley stand the 5 minute drive to the restaurant, so I don't know how we would've made it all the way to dinner.

I know Chad could barely stand it so when we arrived I kept making Chad wait by saying I had to go to the bathroom..twice, or after we get our chips, and lets order our food first. Honestly, I was totally expecting, and completely excited, to be having a boy. We had everything we needed, I loved the name we picked out (Cooper), we just knew what to expect with a boy. So, when we opened the envelope and the picture said "Baby Girl" we were caught a little off guard. I'm not sure which happen first but a tear rolled down both of our faces and I think we both might have peed ourselves a little (not far fetched for me, I sneeze and pee these days...ugh...more kegels).

We couldn't stop smiling and when our food came Chad blurted out "we're having a GIRL" to our waiter...so cute. We are so incredibly excited to have the opportunity to have one of each. We honestly would have been excited either way. After experiencing the joys of of Griffin, how could we be disappointed with a little boy! However, with one of each, now I don't have to go for number three if I don't want too...oh, the freedom. 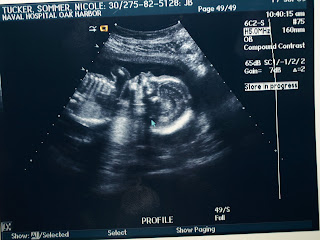 Telling our parents was so much fun. We knew they all were secretly hoping for a little girl (my dad was not so secret about it as he complained his son-in-laws didn't know how to make little girls...he has 3 grandsons). Being the first granddaughter on both sides, we knew Riley might be a little on the spoiled side. So, we opened with "You had better get a second job!" Needless to say, since our ultra sound, the pink gear has really started to roll in. The same night my parents found out, they went on a Riley shopping spree and Chad's mom has already fitted Riley with her very own pink Ohio State attire.

Griffin, on the other hand, was a whole different story. When we told him, he was too busy playing with his friend Maggie to really care. However, his tune changed that night at bed time. Every night all three (4 if you count our black lab) lay in his bed and talk about our day. Riley was the subject of choice this time. We asked him if he was excited to have a sister. He told us no. I said, "Oh, you wanted a brother?" He burst into tears and said he wanted neither. Our hearts broke in a million pieces for him. We tried to explain to him that having a baby didn't change how special he was to us. We made up a song about how Riley was going to need his big brother to protect her...didn't help much. We said good night but he called me back in within 15 minutes. He requested I sing the "mommy-Griffin" song. Again, my heart broke in a million pieces. After I was done singing about how special Griffin is to mommy he fell right to sleep.

Over the pass couple of weeks, he has warmed up to the idea of a baby sister. He wears his new Big Brother t-shirt all the time, kisses my belly and tells Riley he loves her. We really talk up his roll as Riley's big brother and mommy's helper. It has been just me and Grif for the pass three years (and Chad when he's not flying) so I can see how this can be scary for him. However, we are already planning ways to carve out time for just Griffin.

Posted by Sommer Tucker at 6:49 AM